Sinusitis refers to the inflammation of the sinus membranes due to an infection caused by a virus, bacteria, or fungus. The sinuses are air-filled spaces in the skull. Following are the types of sinuses:
Frontal sinuses
Maxillary sinuses
Ethmoid sinuses
Sphenoid sinuses
If the opening from a sinus cavity becomes blocked, the flow of mucus gets blocked and results in pressure buildup causing pain and inflammation.

The most common symptom of acute sinusitis is a cold that doesn’t go away. Other symptoms are:
Bad breath or loss of smell
Cough, often worse at night
Fatigue
Fever
Nausea
Headach
Sore throat

Sinusitis can be caused due to following reasons:
Small hair in the sinuses
Cold and allergies
A deviated nasal septum
Smoking
Weakened immune system from HIV or chemotherapy

Tinnitus is a condition when an individual hears a sound that no one else can hear. Different people hear different types of sounds such as ringing, buzzing, or other sounds. This condition can vary in intensity and can be constant or frequent. Tinnitus can sometimes lead to hearing loss.

Hearing a sound that no one else can hear
Ringing, buzzing, or any other sound

The causes of tinnitus are:
Ear infection
Excess wax in the ear
A pierced eardrum
High blood pressure
A benign tumor on the acoustic nerve

Nasal airway obstruction is a condition where the nasal passage gets blocked and makes it difficult for an individual to breathe through his nose. Sometimes the cause of nasal airway obstruction is enlarged turbinates. Turbinates are small, bony structures located in the nasal passages that are covered with mucous membranes. This condition makes everyday activities such as eating, speaking, and sleeping more difficult.

There are many causes of nasal airway obstruction including:
A deviated septum
Hormonal changes
Allergies
Environmental irritants

Tonsils are small lymphoepithelial tissues situated near the oropharynx and nasopharynx. These immunocompetent tissues are the immune system’s first line of defense against ingested or inhaled foreign pathogens. They are located on both sides of the throat.

Tonsillitis is a kind of disorder which involves swelling of tonsils. The major reason behind tonsillitis is an infection caused by the bacteria or virus.

Below are the symptoms of tonsillitis:
Difficulty in swallowing
Ear pain
Fever, chills
Headache
Sore throat
Tenderness of the jaw and throat

Eardrum perforation refers to a hole or rupture in the eardrum, a thin membrane that separates the ear canal and the middle ear. Another medical name for eardrum is tympanic eardrum. The middle ear is connected to the nose by the Eustachian tube, which equalizes pressure in the middle ear.

There are several signs and symptoms of a perforated eardrum including:
Ear pain
Hearing change or loss
Fluid or blood draining from the ear
Vertigo (spinning sensation) 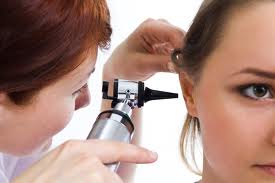